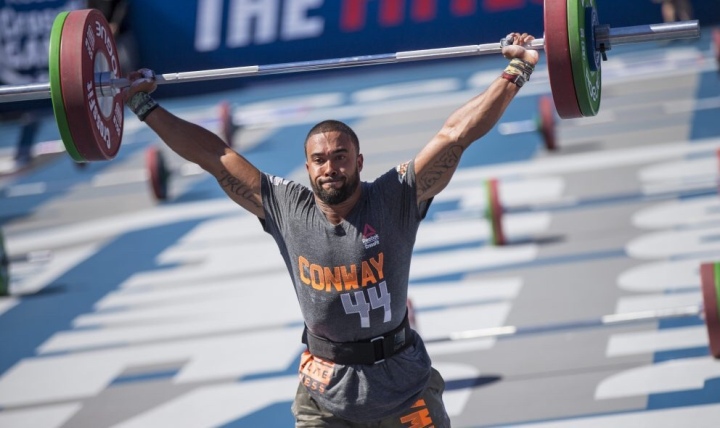 In light of what this blog covers (faith, fitness and everything else,) as a Christian first and athlete second, I can attest to the fact that 9 times out of 10, God has taught me the most when I am training. There exists a beautiful intersection between faith and fitness, one gleans the physical body, and the other gleans the spiritual body. If it wasn’t for God, I would be the sorest loser haha, and if it wasn’t for fitness, I would have a very unhealthy relationship with myself, others and food. I’ve always thought of fitness as the cheapest form of therapy. I love reading about other people’s faith and fitness walk and I cannot think of anyone better that I could have gotten to inaugurate this new feature on the blog than Adrian Conway!

Adrian wears many hats, as a competitive CrossFit athlete, he has won the affiliate cup with the Wasatch Brutes at the CrossFit Games 3 times. He is part of the Brute strength training team, and the CrossFit HQ L1 seminar staff. Adrian is an owner in the FNXfit supplement line,  recently became a gym owner ‘Live in Victory CrossFit’ , and if that wasn’t enough, he still helps run and coach at Wasatch CrossFit. The common thread in all of Adrian’s answers is this: hard work pays off but the way to have longevity is found in being consistent and being a person of integrity not just to others but to you. Massive thanks to Adrian for taking time out of his schedule to answer these questions. I was left inspired and motivated to do more and be more not just in my fitness, but also in my faith walk, which at the end of the day is what sustains it all. I am incredibly honoured and tickled pink to share this with y’all.

Welcome to the Athletes’ Corner! 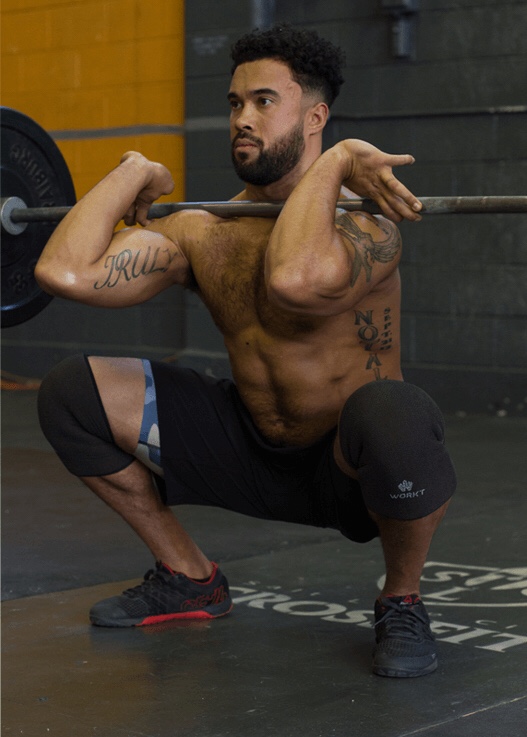 AC: I’m a Christian. That is what defines me, my actions, my words and my thoughts. An athlete isn’t a part of my identity, it is just something that I “do”. To answer your question directly, being a Christian man influences everything I do, so being an athlete is a very small part of that. It does reflect traits that carry well into my athletic pursuit however. I am a hard worker, always going to be THE hardest worker in the room or even in my field of current pursuit. I do this not because I want to be great but because as a disciple of Christ I’m called to “do all things as if doing them for the glory of God.” (Colossians 3:23).

I also know that how I win, how I lose, how I interact with my peers, the way I serve my community all have to be done in this way as well.

I tell people, and a lot of time I think they assume I’m being sarcastic and joking, that everything good you see in me comes from God. I mean it when I say it. My nature is not that of my actions, I have to make several internal decisions to be Christ like all the time, it doesn’t come easy, especially in the heat of a competition.

There’s a song called ‘One Sixteen’ by Trip Lee, that personally for me was a game changer. I recall being a young girl in church believing that the best place (the only place,) that I could honour God was there in church, but I couldn’t sing as well as the others and I wasn’t really a fan of people. So I said to myself perhaps I could volunteer somewhere in Africa…ironic seeing that I live in South Africa but it had to be somewhere more remote and more African…and then I heard this song. This was (as Oprah loves to say,) my ‘aha!’ moment, I realized that even in my training, I could honour God unashamed, fitness could be the way that I honoured Him and celebrated all the things that He had allowed this body to do and then by careful discipline, work on the things that it couldn’t yet do. This meant (and still means,) that anytime I want to have a stank attitude, I can almost audibly hear the Holy Spirit telling me ‘girrrlll is this really honouring me?’ and then the brat pipes down for a bit…

AC: I’ve had a lot of ups and downs as a Christian athlete. When I first studied the Bible with a few men who were gracious and brave enough to invite me to, that changed my entire life. I grew up knowing of only hypocritical types of Christian worship which unfortunately is the majority of self-proclaimed Christian lifestyles out there. I saw men and women who claimed to know of Jesus not living anything like the Bible taught but showing up to church on Sunday and putting on the best front you could ever see. So as I studied with men that showed me on a day to day basis what it looked like to be a disciple of Christ, it strongly impacted me and encouraged me that I could do the same. Because becoming a Christian changed me so much, it changed how I competed. I often used rage, anger and fear as fuel on game day. I literally lined up against others with “hate” in my heart. In a violent sport line division like football in the US can be, it played to my advantage, but what it was doing to my heart and what I was reflecting wasn’t right. After I was baptized and my perspective on life and eternity really transformed I couldn’t pull on those “negative” emotions anymore. So much of my past that I had now forgiven or moved on from couldn’t be my fuel.

My passion took a shift from being self-focused, and hate filled to being the best instrument for Christ that I could be. He blessed me with gifts, it is my obligation to get the most potential from those gifts and allow them to be a tool to share his word and who he is with others. My aha moment was in 2007 at Weber State University.

In my faith/fitness walk, I have two central verses that I always go back to, Hebrews 12:11-12, paraphrased it reads ‘no discipline is enjoyable while it is happening-it’s painful (yes!) take a new grip with your tired hands and strengthen your weak knees.’ and Colossians 3:23, doing everything heartily as to the LORD. In a way it has strengthened my belief that through physical discomfort, there is a gleaning and strengthening of the spirit that happens, and whenever I come dangerously close to throwing an ugly tantrum, thankfully the part of my mind that remains under Christ’s control always goes to these verses.

AC: I have always loved the verse Philippians 4:13 “I can do all things through Christ who strengthens me.” I loved it even before I was a Christian, not fully understanding the meaning, I took it as God would give me the ability to do literally ANYTHING almost like a superman type of perspective. Now it means much more. I like to look at the verse in the full context. Prior to verse 13 Paul describes that through his walk with Christ he has both been in situations where he has had great needs and also where he has had plenty but that through Christ he knows he can do anything. So, from my perspective no matter what I must endure in order to improve or to seek victory, I know Christ provides that for me. I love many scriptures though, and I think about a few others while competing as well, but for life in general, and when competing that is my favourite as I rock that verse on my inner left wrist.

About two months ago, I injured my back and I remember my coach telling me to scale the wod, but we’ve all unfortunately at least once, listened to the egotistical voice inside of us telling us to keep going. I recall stopping mid-wod and crying because I was in so much pain. I very sheepishly realized that had I listened to my coach (sometimes they know better haha), I would not have ended up in tears, aggravating an existing injury, I’m sorry Bruno. I’d like to say that it was on that day that the stubborn streak died, but I went through a few more months of painful training sessions, back getting worse, for me to finally put to the grave… ok partially put to the grave my stubborn streak.

AC: Of course I’ve had moments where I don’t listen to my instincts and others advice, I’m a boy! Haha. I joke but it’s true. Pride is the fall of all men. And I battle with it daily. I have had a few instances, one specifically that led me to injuring myself prior to the 2014 regional days before the competition. I trained so much that I beat my body down, the week out instead of resting, trusting my training and de-loading, I trained hard and kept up my attack. I did this really out of insecurity. I was worried I wouldn’t win the regional, and that was my goal, crush everyone. (See I’m ruthless still in my own mind, dominance is always the goal, not mere OH HEY, let’s just do our best…..sounds again brutal but its quite cowardly for me to claim that’s all I want when it’s not true.) So out of my inability to trust the process, I trained on, and had to end my season very early. That year I was the fittest of my career and the programming at Regionals and at the CF Games was likely the best if I could have chosen the events, that I could have asked for. I look back thankful for the missed opportunity because again, I’m grateful for where God has put me. And what if I had made it? And then gotten top 5 at the Games? I think my life would have made several different turns, I’d rather be no where else than here, right now. 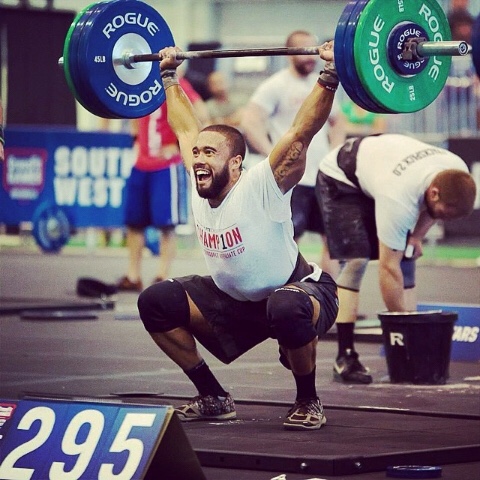 This site uses Akismet to reduce spam. Learn how your comment data is processed.

My name is Aurélie and I created this blog as my online diary to share EVERYTHING about my life, the things and people that inspire me, or annoy me (depending on the day), with you! I’m so thrilled that you’ve decided to join me on this beautiful journey of faith, fitness & everything else.

Meet you on the 'gram